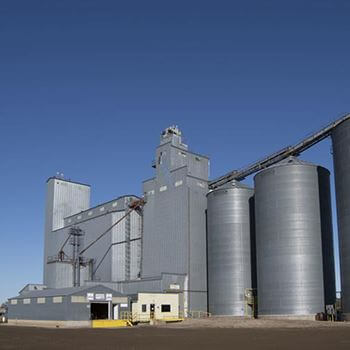 In the true spirit of farm-to-table, a restaurant in one small South Dakota town is making its food with the soybeans local farmers deliver to the grain elevator next door.

Willie’s Bar and Grill in the central South Dakota town of Saint Lawrence, is one of the first restaurants to use high oleic oil from locally grown Calyxt brand soybeans in its fryers.

The restaurant sits in the shadow of the town’s elevator that reopened this fall for the exclusive purpose of gathering the company’s gene-edited high oleic soybeans. Calyxt and the ag cooperative Agtegra partnered to open the shuttered elevator and celebrated with an event in Saint Lawrence Oct. 24.

Willie’s Bar and Grille general manager Kori Blake was on hand for the event. The Calyxt-made Calyno oil became her preferred cooking oil at the restaurant during a chance encounter she had with Tom Stoddard, Calyxt’s grower relations leader and one of the first employees at the company.

As Stoddard was driving to Saint Lawrence to promote Calyxt’s newest soybean variety, he stopped into Willie’s almost weekly to grab a bite to eat before heading off or to the Morog’s operation.

“If you go to Saint Lawrence, you can see Willie’s in the foreground and the elevator in the background,” Stoddard said.

During one meal at the restaurant, Stoddard thought to ask Blake if Willie’s would consider using locally grown and crushed soybean oil in her kitchen. As it turned out, Blake was already in the market for different frying oil.

“We visited a little bit and honestly at the beginning, I just thought he was another salesman,” Blake said.

After a brief talk about how Calyxt’s soybean oil was non-GMO and locally sourced, Stoddard gave Blake a few bottles of it and the rest was history.

Over the last few months, Blake said using the oil has been a dream on the fryers. One of Willie’s premier food items is chislic, and the deep-fried meat cubes can cause a great strain on the frying oil. Other oils have to be replaced often, she said, and the cost adds up for the business. High oleic soybean oil, which has a laundry list of health benefits, is also easier on frying machines.

“It’s so much better quality,” she said.

The Calyxt oil is in high demand. The company said supplies are claimed almost immediately upon crushing. But Blake is excited for the possibility’s the St. Lawrence elevator gives for expanding their access to oil.

“It’s really just kind of neat,” she said. “My husband is a farmer, so supporting local foods is great.”

In addition to preparing the meals for those on hand during the elevator’s re-opening, Blake and her team at Willie’s also made dozens of meals for farmers who were working in the fields that day. They toured the area delivering hot beef sandwiches to farmers.

Looking forward to 2020, Stoddard aims to expand the number of acres growing their beans to 100,000 – a sizable increase from when he first visited the area. At that time, four local producers attended a meeting about the company, and he was pleased to get a commitment on just 25 acres.

“That still kinda blows my mind but I’m so confident in the agronomists we have that I’m really excited to see what happens at the end of the year,” Stoddard said.

As of right now, the new Agtegra elevator is contracted 100% for Calyxt’s soybeans from local growers in Hand Country, as well as a few stragglers outside the county. After next year, when Calyxt introduces its high-fiber wheat variety, Stoddard said the dream is to get more elevators dedicated to their products.

“Once those wheat varieties come online, we’re going to go to our growers and staple on wheat,” he said.