Leading Ag Retailers Walk Before They Run With Autonomy 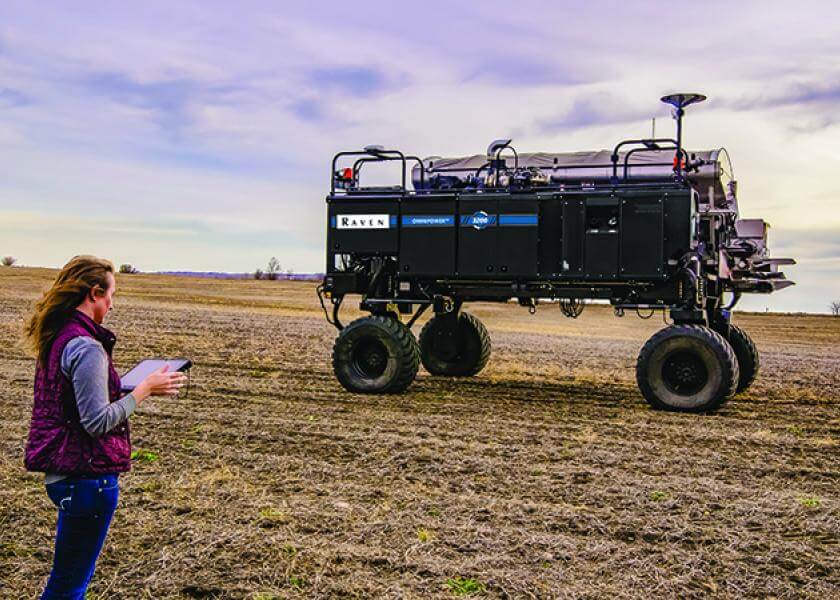 Autonomy has arrived in agriculture. That’s the takeaway from talking with the tech team at Agtegra in South Dakota after they demonstrated a Raven OMNiPOWER unit this past fall for spreading applications. Matthew Boomsma and Neal Hiemstra—self-admitted early tech adopters—say they didn’t even believe it until they saw it.

“It catches you off guard when it goes out of your sight. When it’s doing something over a hill or behind a tree belt, you realize it’s truly doing it’s own thing,” Hiemstra says.

The unit was a traffic stopper as farmers stopped along the adjacent roads to take pictures.
The Agtegra crew spread more than 2,600 variable-rate acres this past fall with the OMNiPOWER. They report they could spread up to 650 acres in a 7-hour day.

“If you said 5 years ago I’d be running an autonomous machine, I would have said ‘what are you talking about?’” Hiemstra says. “Inside Agtegra our automation is 10x of where we were five years ago. That’s how fast this moves. The next 10 years will be something to watch.”

SET UP FOR SUCCESS

The Agtegra team says they see their use of OMNiPOWER as part of their path to autonomy, but before they were able to deploy those machines in the field, they had laid a strong digital foundation to allow for a seamless use of such technology.

“We want a 360° view—all the way from the grower, to the agronomist, to the operator, and back to the farmer,” Hiemstra says. “We have APIs and connections that go everywhere.”

Across the 72 grain and agronomy locations for Agtegra, its digital journey has included using Kahler automation at its fertilizer plants since 2010, AgSync for dispatch since 2013, and using Raven Slingshot for file transfer for the past three years.

It’s an impressive digital infrastructure of the 5 million acres the team sprays, spreads, data logs and soil samples. This approach will be a springboard in how it’s able to use autonomous machines.

“When you are only half in, it’s tough to do it. It’s tough to swim getting only half your body wet. If you’re all in, you truly see the benefits of it. if you only try to do half, you don’t see the gains,” Hiemstra says.

Pairing the autonomous machine with a manned machine, knocks out acres quicker.

“The OMNiPOWER had a New Leader G5 box, the same box our RoGator 1300 had,” Boomsma explains. “We could sync the machines to run together in the same field without any overlap issues–together they operate as one machine.”

Boosmsa also reports times when he could get the machine started in the field, and then be able to complete other job tasks from his pickup while it ran. He was impressed by the built-in safety features including the situations that would stop the machine, such as drifting off its guidance line.

OMNiPOWER is supervised autonomy–there has to be someone nearby. The full autonomy being envisioned is where machines drive themselves to the field, unfold, scan the field and adjust parameters.

“Everyone is in a race to get there, but the notion that autonomy is one defined outcome is being tabled,” says Ben Voss, director of sales at Raven. “We are talking about how there are various stages of autonomy. And everyone can embrace various aspects of autonomous technology and put it in layers of applications.”

Raven recently introduced its second generation of OMNiPOWER, the 3200 model. Its predessor technology, the DOT platform, was acquired by Raven in 2020, and rebranded under the OMNi branding. Of the first generation machines, like the one run by Agtegra, there were about 12 out in the market for spreading and spraying applications. About the same amount of the 3200 model will be produced for Raven’s current business model, which is based on leased units by retailers.

“Right now, this is the most advanced autonomous machine on the planet. There’s no cab. At the farmer’s field, it calculates the job, the operator hits the go button, and it’s off,” Voss says.

He adds it’s the brains of the system that make it unique–and Raven has been able to integrate even more of its systems and technologies on the updated 3200 model.

With autonomy gaining traction, it’s early demonstrations that are helping retailers get comfortable with the technology and see the opportunities for using it.

“It’s important retailers are planning for what can flatten their learning curve for autonomy and perhaps start building training programs and start building infrastructure,” Voss says. “Maybe they don’t have RTK or cell coverage–so temporary solutions include building a wifi network.”

He adds Raven has a plan to continue to make machines available to ag retailers and offer specific training and events.

Already, the Agtegra team is envisioning how autonomy can help them with ATVs and other vehicles for soil sampling, data logging and other labor-intensive jobs.

THREE REASONS TO LEAN INTO AUTONOMY

Autonomy provides for three main advantages for ag retailers: reduce costs, lower labor needs and stay relevant.
“A lot of ag retailers have mentioned struggling with labor. How do you get people excited about working in farming again,” Voss says. “This is a way to maximize your best operators and bring in talent who are excited to work with technology.”

Voss says the most revealing takeaway from the field demonstrations of OMNiPower is—most of its technology is available on other machines.

“Many didn’t realize what for example Slingshot really enabled them to do out in the field,” he says. “This showcases the power of machine synchronization and sharing coverage maps so one machine can take over where another left off.”

With autonomy developments coming at a fast pace, the Agtegra team wants to stay ready.
“I got see autosteer first come out, and that adoption curve. And now you are seeing an actual machine operate from a computer,” Boomsma says. “You’re watching the machine go up and down the field unassisted, and the most you have to do is bring it back to the truck when it’s empty. Technology is here and it’s never going to go away and it’ll only advance more, Boomsma says.”