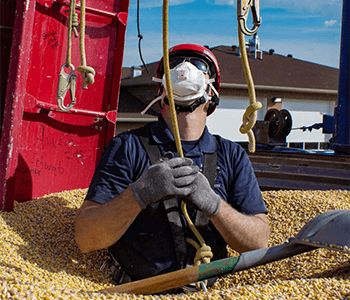 A stranger's death in familiar territory can come as a shudder, even when it's a state away.

A Minnesota man lost his life in a grain bin accident at the end of January, another in August. Similar awful news came up in back-to-back deaths in Illinois in January, followed by another just a few days ago. And in September, two other death were reported in Wisconsin. In January, two grain companies were cited and fined by the Occupational Safety and Health Administration.

"Aberdeen Fire Rescue has responded to one grain bin rescue since 1999. The grain bin rescue was located at the North Central Farmers Elevator facility at Warner on Oct. 19, 2010," said Joel Weig, battalion chief with the fire department.In the wake of those tragedies, producers have taken to social media to share their care and concerns along with warnings of the danger of crusted grain and condemnation of death-taunting acts.

Ag gatherings like the Northern Corn and Soybean Expo at the Fargodome in North Dakota earlier this month have included demonstrations of grain bin rescues and advocation of safety measures. Aberdeen has had a number of its own such demos.

"With wet grain (and the) weather conditions, it’s no surprise. Put the stuff in wet and the damn stuff gets hung up on the sides," said Michael Roemmich, a lieutenant with Aberdeen Fire & Rescue. "But going in grain bins is just asking for trouble."

That was a close call, but there were no fatalities.

"Just in South Dakota, we’ve been called to three," said Beth Locken, director of safety and environment with Agtegra, an agriculture cooperative that covers a large swath of the Dakotas.

Those events were in the past seven years or so, she said. The grain cooperative has a rescue team and keeps a close relationship with city and rural fire departments while also outfitting them with life-saving equipment. Roemmich said the Agtegra rescue crew is a great asset.

"Cody Bonn and his team is great. If you're going to learn, learn from experts," Roemmich said. "To be honest we co-op trainings with them. They extend a hand when they have trainings. We take an active role in doing that. When we have active training we call them up. They know our capabilities, we know their capabilities. The reality is that if something happens, we are all going to be there anyway."

"About 10 years ago, we donated 60 to 70 rescue tubes to rural fire departments in our trade area" Locken said.

The rescue tubes come in four aluminum parts that are slid down around a person engulfed in grain.

"If they are stuck in the middle we build a coffer dam around them (and it) forms a circle around the employee. Like putting a little grain bin inside of the big grain bin," said Locken.

Then a small auger removes the grain from between the tube and the person while the tube protects the person from being further buried in the grain bin. The departments train with a trailer that was developed to simulate a grain bin rescue.

A grain bin rescue training exercise is performed by Aberdeen Fire & Rescue and Agtegra personnel. It uses a grain bin rescue tube. The tube surrounds a person caught in grain, then a rescue-specific auger is used to remove the grain while the tube protects from another collapse. The person is then raised out of the tube and the bin through a harness mechanism. Courtesy photo

Question: What equipment does the fire department have for grain bin rescues and how is it used?

Q: What type of training do first responders have for grain bin rescues?

A: All Aberdeen Fire Rescue personnel are trained with specialized training in rope rescue and/or confined space rescue.

Q: What cooperation do you have with the large grain entities like Agtegra for these types of safety measures? Or how do you work with elevators to help prevent them?

A: Pre-incident planning is an important factor in preparing to handle these types of incidents. Aberdeen Fire Rescue regularly trains with the Agtegra grain engulfment team and Livestock Specialists Inc.

Q: What are the conditions that increase the danger in a grain bin?

Q: When farmers are working in a bin, what protocols should they follow to be safe?